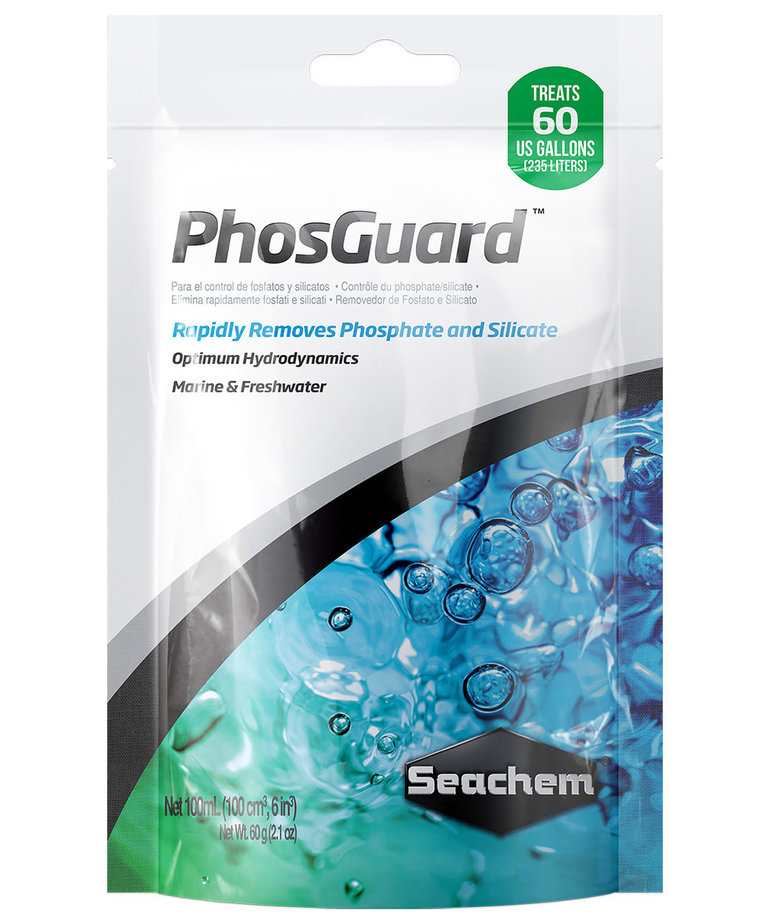 Seachem PhosGuard The top of the line filter media is scientifically designed to quickly remove harmful phosphates and silicates from both freshwater and saltwater aquariums. The media was created with a specially designed spherical shape to promote ideal hydrodynamics and the increased porosity of the beads helps to improve both the efficiency and the capacity to bring aquarium water to the proper parameters. Despite being effective for both freshwater and saltwater aquariums, Seachem PhosGuard actually operates better in marine environments where itâ€™s use is more often required. Comes in a 100 ml container.<br
Instructions:

The media may generate heat upon initial contact with the water. You can pre-wet the media by adding to a double volume of freshwater, followed up by a thorough rinse with clean water. For best results, Seachem PhosGuard should be rinsed prior to use and placed in such as way as to maximize the flow of water passing through it, but not so aggressively that it moves and tumbles against itself in the flow. It is incredibly versatile and can used in a canister filter, media chamber, box filter, or any high flow area of a trickle filter. Using a filter bag is recommended for easier maintenance and mobility. Use 85 mL (1/3 cup) for every 200 L (50 US gallons) of aquarium saltwater or for every 400 L (100 US gallons) of aquarium freshwater.

Leave the media in place for up to four days and then carefully test the phosphate and silicate concentrations. If the concentration of the component you are trying to decrease has not dropped to around 0.02 mg/L, then it is time to replace Seachem PhosGuard, otherwise leave in place until levels begin to climb again. As long as the concentrations remain under control, the product has not yet been exhausted. Over treating is not recommended. This media is not an exchange resin and does not release anything back into the water, ensuring optimal water parameters at all times. It does not leach phosphate or silicate back into the water and may be removed, dried, and returned to service until exhausted. For greater ease of use, the continuous use of small quantities of the media yields significantly better results than inconsistent use of larger quantities.</br